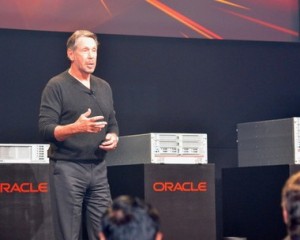 Sparc T5, T4 and M5 servers will work with the high-speed interconnect technology.

Oracle has extended its data center fabric to its Sparc-based Unix platforms, promising to let enterprises tie more servers and applications into the high-speed infrastructure.

The fabric technology, which Oracle acquired in its purchase of startup Xsigo Systems last year, connects servers and storage over Ethernet and Infiniband and allows for thousands of virtual network interfaces. That saves IT departments from having to install multiple network interface cards and host bus adapters in its physical servers, while tying together the resources in the data center at speeds up to 80Gbps (bits per second).

The addition of Unix support is the first change Oracle has made to Xsigo’s technology since the acquisition, apart from rebranding it as Oracle Virtual Networking, said Charlie Boyle, senior director of marketing for Oracle’s data center division. The company added Oracle Virtual Networking support to its Sparc T5, T4 and M5 servers and for the Oracle Solaris 11 OS on both Sparc and x86 hardware. Connecting Unix servers to the fabric will give users, as well as other servers, faster access to the critical applications that often run on those platforms, he said.

Oracle expanded the Sparc-based T and M server lines last week with the T5 and the M5-32, both of which are based on new processors. It’s the first time the company has built M-class servers based on its own chips.

Oracle Virtual Networking is designed to deliver the benefits of software-defined networking (SDN), including rapid application provisioning, detailed quality-of-service controls and simplified movement of virtual machines from one physical server to another. It’s built around the Oracle Fabric Interconnect hardware platform, which provides the high-speed connectivity. The company claims Oracle Virtual Networking can boost application performance by four times while cutting LAN and SAN capital expenses in half.