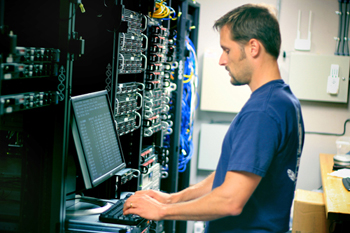 Some network operators say they need new tools to set up and manage connections in a virtualized world, even if that means adopting software-defined networking technology, which is still in its infancy.

Server and storage virtualization has freed computing and data from the confines of boxes in fixed locations, letting IT handle resources more efficiently. But networks still require manual configuration to keep those resources properly linked. SDN is designed to extend virtualization to networks, too.

That’s an idea whose time has come, according to executives from two carriers and a large enterprise that are planning to test the Virtualized Services Platform, the SDN system introduced on Tuesday by Alcatel-Lucent venture Nuage Networks. They spoke on a panel at the company’s launch event in Santa Clara, California.

The provisioning of new virtual machines at the University of Pittsburgh Medical Center routinely kicks off lengthy discussions among IT staff about setting up the necessary connections and privileges for those VMs, said Bill Hanna, UPMD’s vice president of technical services. With 3,500 VMs and growing, that’s not a good thing to hear, he said.

“Today, the frustration is really with the virtualization folks, because the networks really do lag,” Hanna said. The problem is the network. “The architecture … does not lend itself to virtualization.”

When the IT department moves VMs from one physical server to another, it changes the patterns of data traffic, sometimes dramatically, Hanna said. Network administrators want a view into those moves and a way to allocate the right amount of bandwidth to each VM wherever it is, he said.

Telus, a wireline carrier that serves consumers and businesses across Canada, can now automatically provision a broadband connection to a home but not to an enterprise data center, said Walter Miron, a director of technology strategy at Telus. The company hopes SDN can help bring that speed to its business service rollouts and is evaluating various SDN systems, Miron said.

The carrier operates many data centers itself and wants to be able to manage them in conjunction with the network, he said.

“Our philosophy is that the data center is part of the network, not adjacent to the network,” Miron said.

French service provider SFR is going up against Amazon Web Services with a cloud computing service operated by Numergy, a venture it established with the French government and other partners. With traditional data center networks, the company won’t be able to deliver the service levels that its enterprise customers will demand, said Pierre Barnabe, director general of SFR Business Team, the carrier’s enterprise division.

Hanna said the fact that VSP is based on technology from Alcatel’s Service Router Operating System, which UPMC already uses in about 100 routers. Still, the network executives know they are delving into largely uncharted territory.

“This is the biggest change in networking in years,” said Hanna, who has been working in the field since the mid-1980s.

SDN won’t fulfill all the promises that are being made for it today, but failures and shortcomings are a part of progress, SFR’s Barnabe said in an interview after the panel discussion. He compared the various flavors of SDN to the different cellular technologies that are now converging in LTE.

“We need to test a lot of things,” Barnabe said. “We need to push innovation.”